Olander Banks – ‘A Blueprint of Success’ 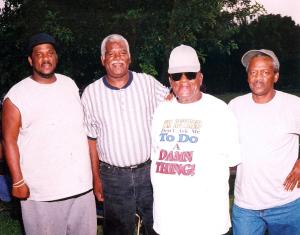 Behind the scene of the Alexandria Gazette’s story on Olander Banks dated October 11, 2018.

Additional information that was not in the article about Olander Banks and his wife, Margaret Lomax-Banks.

Olander came to Alexandria with his parents when he was five years old. When he was eight years old, his family was living at 934 North Columbus Street in Alexandria. Olander’s parents, siblings and grandparents were all living in the same household in 1930. His parents were Algie and Annetta. Olander’s siblings in 1930 were Algie, Jr., Marshall, Roscoe and Bertram Emanuel. Olander’s grandparents were Fannie and Isaac Banks. His entire family migrated from Danville, Virginia to Alexandria in 1927 except Bertram Emanuel and all the other children who were born after Emanuel were born in Alexandria, Virginia.

Olander married Margaret Lomax after 1940. Margaret was living in the household of her parents, Abraham and Ella Lomax, at 831 North Patrick Street.

You can read the rest of Olander Banks’ story in the Alexandria Gazette Newspaper dated October 11, 2018 on page 8 at http://connectionarchives.com/PDF/2018/101018/Alexandria.pdf.

Char McCargo-Bah is the owner/founder of FindingthingsforU, LLC. She is a professional genealogist, researcher consultant, lecturer, teacher and author coach. She is the author of two books and you can find those books on amazon.com by putting search on her name. She became a Living Legend in Alexandria, Virginia in 2014.
View all posts by cmb12 →
This entry was posted in Black People of Alexandria, Entrepreneurs and tagged Alexandria VA, Auto parts, Businessman, Olander Banks. Bookmark the permalink.

2 Responses to Olander Banks – ‘A Blueprint of Success’